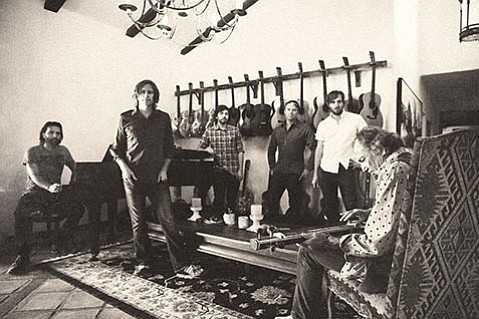 GIVE ME A LIFT: With U.S. Elevator, S.B. folkman Johnny Irion and friends put aside the acoustic guitars for electric ones to make music inspired by ’60s and ’70s rock-and-pop greats.

U.S. Elevator On the Up and Up

U.S. Elevator On the Up and Up

When you listen to U.S. Elevator’s eponymous debut album, you may wonder if there was a gap in the space-time continuum. There’s something uncannily familiar about the spirit of the music, which channels artists such as Neil Young, The Beatles, and Harry Nilsson. But it’s undeniably of the moment, as well. A new project from Santa Barbara folk musician Johnny Irion, music partner and husband to Sarah Lee Guthrie, it was a chance for Irion to explore his more classic rocking side in new ways.

Irion felt a rock ’n’ roll itch creeping through his usually folksier skin several years ago. The final result of this seedling thought is U.S. Elevator, a bright, funny, deeply melodic work with plenty of local nods in songs like “Pierre Lafond” and “Momma-Cito Blues.” “It is the geographical that takes over me,” Irion said, and in its Wurlizter flourishes and tamboura accents, the music certainly evokes the sun-drenched sounds of California’s psychedelic pop-rock heritage.

What’s more, the new album is very much made from a variety of regional moving parts; the band and subsequent album came together through a variety of serendipitous connections and support networks. Two years ago after a Lobero show with Guthrie, Irion met renowned filmmaker, special-effects master, and music lover Alan Kozlowski, who happened to own a vintage, 1,000-pound, 24-track Studer A80 tape machine. The mammoth machine provided the perfect medium to make Irion’s retro-rock dreams a shining reality, and area soundscapers Sonos provided the speakers for playback.

Before long, Irion and a band of S.B. friends — featuring BoMo Design founder Nate Modisette on bass, colleague Erich Riedl on drums, and Deckers innovator Anders Bergstrom on guitar, plus Brett Long and producer Tim Bluhm both adding piano and vocals — had the right elements in place to live-track each instrument the old-fashioned way. The group holed up in a Mission Hills recording studio and got to work.

Recording in this analogue, live-tracking manner allowed the band to grow and explore new territory, Kozlowski said. “We wanted to come up with vintage gear that would lend the vibe and the spirit, but also so everybody could throw down in a different way than they’re used to,” i.e., track-by-track digital recording, he said. This allowed the musicians “to stretch out of their comfort zone and take risks, and I think it’s evident in what showed up in this recording.”

Kozlowski, in music and in film, likes to employ analogue technologies whenever possible and helped boost a spirit of analogue-digital combination within the recording sessions. Different technologies, he said, “all have their advantages; you just have to know how to use them in collaboration and expression for what they’re good at, instead of having a fixed concept of what they do.” He credits the teachings of his friend and musical guru Ravi Shankar, who “would surrender to the moment but never fail to find it,” as a guiding spirit in the process.

The album, however, almost never found its way into the public eye. “You can’t have hope for a record, but the sad thing is, you do,” Irion said. He planned on self-releasing a few hundred copies to give among friends and select industry reps, until friend and celebrated singer/songwriter Sharon Van Etten urged him to dream a little bigger. With the assistance of Van Etten and buddy Zeke Hutchins, the record found a much wider exposure. U.S.Elevator even opened for Stone Temple Pilots earlier this fall, giving Irion the chance to road-test the flexibility of his rock voice, which friends have deemed “Neilson Schneilson” for its Young-Nilsson-like tone. He’s feeling ready to believe in his new creation. “I’m getting back to the hope factor,” he said.